At last  I had a meeting  with Carrie Preston , something I had been looking  for a long time. This American Garden Designer living in the Netherlands  had often managed to get my attention. On the initiative of Carrie we met at the ‘Bakker’s Winkel’ on the site of the former gasworks in Amsterdam. It was rather busy in this trendy restaurant but without effort I was able to recognize her among all these people .

About a year ago in spring 2013 I went to Amersfoort, a city in the heart of The Netherlands, for a meeting with Tanja van der Knoop  owner of ‘Hof van de Vierde Sortie’, a beautiful landscape garden. Around the house are a number of lush classic borders wich directly drew my attention , the borders were different then many others that I had seen before they had something ‘Bold’in their appearance.  I asked Tanja wich Garden Designer was responsible for the design of this part of Hof van de Vierde Sortie she enthusiastically told me it was Carrie Preston.  It was not the First time I heard that name so it was time for a meeting with Carrie.

Carrie grew up in New Jersey, which with a population of over 8 million and an area of nearly 23,000 km2 is the most densely state in the USA. The fertile soil in this state caused a lot of horticulture and gave it the name ” Garden State “.

Carrie’s  father is working in the field of construction  and many of the conversations at the Preston Dining table were therefore also about building. Carrie developed at an early age an interest in plants and chose a green course at a Higher Horticulture College in Pennsylvania, “plants play a major role in my life for as long as I can remember, even in the many trips to gardens everywhere in the world, I have gained a lot of knowledge “.. In the same period Carrie worked at a farm shop,together with an enthusiastic team of colleagues  she turned a small department with garden plants  into a full-fledged department with a wide range of perennials. Once in The Netherlands she studied  Garden and Landscape Architecture.

In 2013 Carrie Preston designed along with Jasper Helmantel, the owner of the nursery Cruydthoeck, ‘De Inclusieve Tuin’ (the Inclusive garden) a project of the Dutch Horticultural Society and a popular nature conservation serie on the Dutch public Broadcasting. This garden shows the opportunities for creating a beautiful garden with much attention for biodivercity and at the same time affordable by reusing  materials in a trendy way and the use of mostly native plants. The design became popular  and caused a new trend in the Dutch Gardens.

Although  biodiversity and sustainability has been a high priority for her in all her designs this is not the most important aspect in her gardens. Functionality of a garden and the attractiveness to residents / users are the most important aspects for Carrie; ” I spent a lot of time in the preliminary stages of my designs and in conversations with my clients , I try to identify  the needs of all members of the family as much as possible,  I’m  beginning to design when I completely have the feeling of being on the same track with the future users” . Carrie says enthusiastically , “I ‘m very motivated to get them outside, when my clients enjoy their newly designed garden they  naturally come into contact with the” green world ” that I had in mind for them , and almost automatically they become interested in plants , bio – diversity and sustainability.

The average city garden in The Netherlands is about 60 m2 and although Carrie with all her experience and knowledge also designs large projects she is very popular by the owners of these  city gardens for creating a design.

Many garden designers work from their own design-style, Carrie has in my opinion the ability to push aside this style ego  and so design purely works from the perspective of the users of this outdoor space  and her own  style comes as almost naturally expressed. Probably it is precisely this way of working that has made her so successful and many customers give her the best compliment you can get which is that they have never been so ” at home ” in their garden.

Mien Ruys was one of the most  famous  and important landscape architects of the Netherlands after World War II and in her  long career she had a major impact on the way how Dutch residents experience gardens and public areas.For a long time now Carrie has been a great admirer of Mien Ruys , “I think it’s great how she as a woman in a time spirit in which the woman could not choose a career , especially in the male-dominated  trade of Garden Design in that time, she has developed into the great  Garden Designer who she has become ” to my question if this admiration also influenced here way of desiging gardens Carrie answered ; ” I do not think it has had a direct impact rather a sense of recognition of what I ‘m doing. ” Carrie told on ” when designing green living spaces a lot of disciplines come together , certainly like Mien Ruys often was working with large projects was in public areas , just  like working with very limited space designing  is not easy , and the greater the challenge to make an attractive green environment in wich Mien Ruys almost always succeeded . I admire her creativity , plant knowledge and the courage to try new things and reusing materials. Personally, I also like to go to the challenge and I think , like Mien Ruys did like for example the development of the ‘ ready -borders ‘ , it is important that Garden Design  should be accessible to the widest audience possible. This is also an important  principle in the book  I currently  am working on together with other Dutch Garden Designers.

Along with Garden Designers;  Bernadette Den Bieman , Jeanne van Rijs and Carolien Barkman Carrie is currently working on this ( e- ) book on garden design in which Dutch Garden and Landscape Architects and Designers interpret a typical city garden with an average area of 60 m2 . From both the audience and the colleagues there are many positive reactions. Tess her partner and wife takes care of the graphic design of the book . A few weeks later Carrie and I visited the Theetuin (Tea  Garden) of Jacqueline van der Kloet, the Dutch Garden Designer who became famous for her designs with bulbs. We were just at the right time , many tulips and other spring bulbs were at their best .The wonderful  combinations of Jacqueline with bulbs and perenials are always inspiring.

During our walk through the Theetuin  Carrie told me the names and characteristics of each plant we encountered as almost ‘ naturally ‘. I know a lot about plants,  but  was amazed about Carrie this woman really knows a lot about plants and ecology . Carrie designs ” living garden ” where users, often family members  are an essential  element  in symbiosis with the green around them, it’s the big challenge for Carrie to get each member of the family outside  and enjoy the space she created for them. Through her experience  with(successful ) designs  for many kindergarten  and green schoolyards for primary education Carrie knows how to get also the youngest members of the family outside . To achieve this she knows how to make  Playgrounds in her own creative way.  These structures are often designed by herself to be efficiently as possible with the limited space and often because it simply does not exist .

Carrie and Tess are currently working on a design for a barn / shed with a modular system. The basic principles are; it should be affordable, have a designer look, can be built by anyone with two left hands and is easy to adjust and move. Tess has a background as a designer in retail and has many modular systems designed for the retail business  and is very  secure when it comes to details.

STUDIO TOOP is the Garden Design business of Carrie , from her studio in Amersfoort she designs gardens  for clients  throughout The Netherlands and beyond.  . In the little spare time that Tess and Carrie have they spend as much as possible on long walks in nature along with their dog a beautiful  Frisian Stabij. If there is still some time left  they  like ….. visiting gardens. 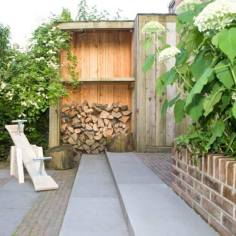 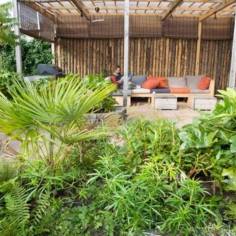 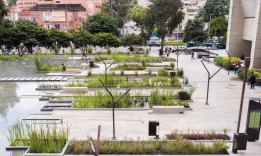